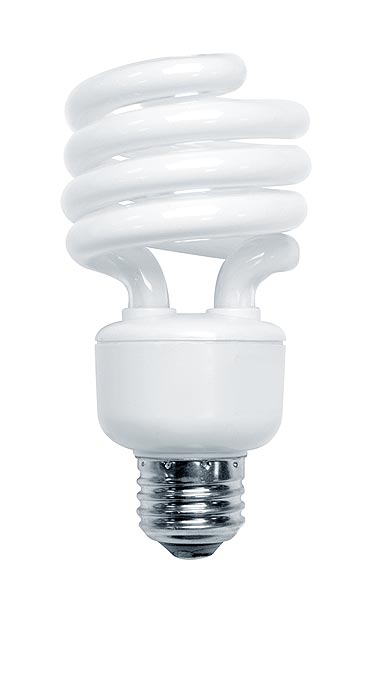 Great confusion is caused by industry and retailers referring to what should be properly called compact fluorescent lightbulbs (or CFLs) as 'low energy lightbulbs'. The confusion occurs because there are other forms of low energy lightbulb, such as LED (light emitting diode) bulbs which is likely to be increasingly used in homes, and a wide variety of energy efficient indoor and outdoor lighting systems used in industry. Worse still, some rather inefficient lighting products, such as traditional incandescent, as well as halogen, come in 'low energy' versions, which are nowhere near as energy efficient (or long lived) as compact fluorescents. It is notable that in other English speaking countries, compact fluorescent lightbulbs are more often simply called that!

Another name that might have been just as appropriate for compact fluorescent lightbulbs is 'long life lightbulbs'. CFLs should generally (although not always) last around eight years - at least four years (6,000 hours in average use), and up to 10 years or 15,000 hours. This alone will save a great amount of shopping activity, waste, wasted time, inconvenience and falls from ladders, chairs and steps. Low energy lightbulbs therefore last longer than many cars, washing machines and televisions. There are some bulbs with only a 3,000 hour (or two year) life. These should be avoided, unless being used in rooms where there is likely to be a very low level of use.

Compact fluorescent lightbulbs are much more efficient because they don't produce so much waste heat. They use only a fifth of the electricity, in other words they are 400% more efficient. There is probably no single energy efficiency action which comes anywhere near to this level of saving and improvement. Your light fittings and shades will last longer because of the considerably lower amount of heat produced.

« Will installing Halogen lights save me money?
What are LED lights? »