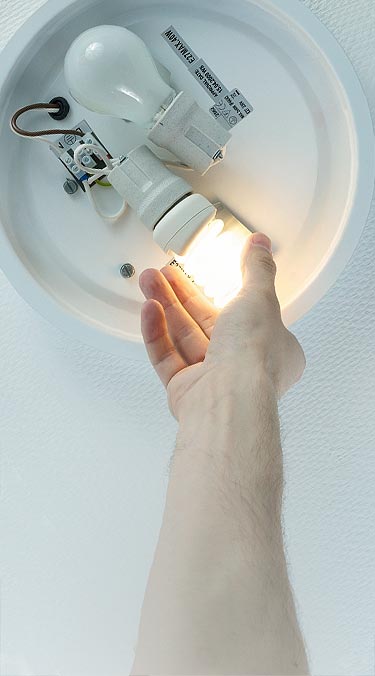 Simply put, it will save you money in the long run! Surprisingly, traditional lighting of the old 40W, 60W, 100W bulbs accounted for around 20% of the energy used in homes. In the early days of electric lighting, the old fashioned incandescent (or filament) bulb had a long reign of over a hundred years, and the pear-shaped bulb, known as GLS - or 'General Lighting Service' - is still a familiar symbol for lighting. However these bulbs are very inefficient (you can tell that because they get quite hot, and heat means waste). They also need replacing regularly - about once a year under average use (or every 1,000 hours).

The prospects for incandescent bulbs are made worse by the fact that they have short lives. The typical incandescent lightbulb in its pear-shaped form (known as GLS - or General Lighting Service) will last 1,000 hours or up to one year's typical use. Frequently turning them on/off shortens their lives even more, but as they waste so much energy, it is necessary to turn them off. There is probably no comparable product that is so short lived, and no reason why such a product should be so short-lived. We have simply become used to the idea that lightbulbs are throw-away devices! If a television or fridge had such a short life, we would be horrified. They can also cause considerable inconvenience, because they fail frequently - the familiar pop as they blow is particularly annoying during a night time trip to the bathroom. A room left in darkness can also be a safety hazard. This is compounded by the fact that you will have to climb up a ladder or onto a chair to change a light, many times more often! As we all know, falls from a low height injure many people every year, and are one of the commonest forms of accident. There is of course a risk of burning should an old-fashioned bulb come into contact with skin.

A key barrier to the take-up of better domestic lighting has been price. Many people do not think about the whole-life cost of a lightbulb, and simply look at the purchase price. Unfortunately, they have to be replaced many times more often, and they use five times the electricity. They actually work out to be very expensive.

Tungsten bulbs (as traditional bulbs are sometimes known, due to tungsten being used to make the filament which glows to provide illumination) are available in a wide variety of power levels, mounts (e.g. bayonet and screw caps), as well as reflector bulbs. However, as a wider range of energy efficient bulbs have come onto the household market, it has become harder to find some varieties.

All around the world, incandescent lightbulbs are being phased out. In the UK, the 100 watt is already gone. But it's not worth waiting to replace all your other incandescent bulbs. Many people had already gone over to 'low energy' bulbs in stick or curly form. The correct name for these bulbs is 'compact fluorescent', or CFL. CFLs last six years or more, and are quite efficient, the proof of this being that they do not get particularly hot. They're not the most advanced technology, however.

Meanwhile in our kitchens, utility rooms and bathrooms, for several decades the fluorescent tube, typically three or four feet in length, provided shadow-free bright lighting. These tubes are relatively efficient, and need replacing once every few years (there is also a starter component which also requires replacement). Later on, it became fashionable to install designer lighting arrays, or recessed lights, exploiting reflector or 'spot' bulbs.

These lights, typically using halogen bulbs, are a little more efficient than old-fashioned incandescent lights - but nowhere near as efficient as fluorescent or 'low energy' (compact fluorescent) technologies. They tend to come in two main forms, the GU10s which are mains voltage and used on open lighting arrays (below ceilings), or low-voltage MR16s which are recessed into ceilings, walls and cabinets (there will be a power unit hidden somewhere, which converts 230volts mains voltage to 12 volts to power the lights). Another low voltage bulb used in these situations in the G53 (AR111).