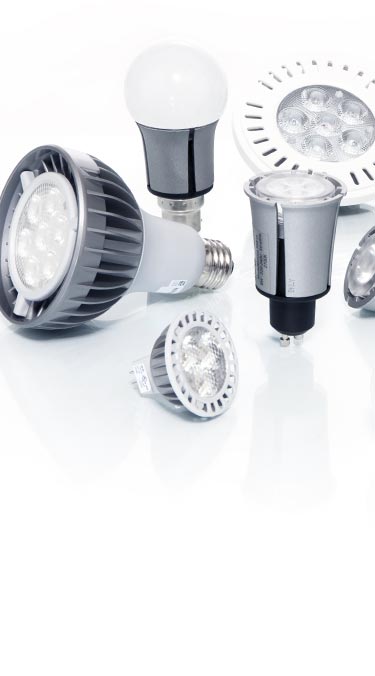 Just as LEDs are leading the way in energy efficient TVs, LED lighting (LED stands for light-emitting diode) has the potential to be more efficient than compact fluorescent lighting (CFL) - i.e. to be lower energy than 'low energy lights'!

LED lights have a longer life - 20 years is not untypical.

Some people ask, should I wait for LEDs before replacing my old fashioned lightbulbs? The answer is no, as in many instances you may be able to use an inexpensive CFL in the meantime.

LEDs do have the advantage of reaching full illumination almost immediately, and of being very compact, and often dimmable.

One of LED lighting's best opportunities is to replace halogen bulbs, especially MR16 low voltage halogen bulbs. Replacing GU10 and GU5.3 halogens with LED equivalent spotlights will significantly reduce your energy bills. The other advantage is the reduction of heat around recess light fittings in ceilings and under kitchen cabinets, which can become a fire hazard in extreme conditions. The need to replace LED lights is greatly reduced too due to their long life characteristics, which is a real plus for difficult to get at locations around your home.

In commercial environments such as offices and shop displays, replacing E27 / Par 30 Halogen Spotlights with LED versions will again reduce your energy costs. Replacing traditional T8 fluorescent tubes with LED models should reduce your bills long-term, however fluorescent strip lights are reasonably energy efficient form of lighting to start with, this means the benefits would be more in overall energy reduction, rather than financial terms due to their costs at moment. Another element to factor in, is you can not just replace fluorescent tubes with LED equivalents, as a suitably qualified person will be required to rewire the electronic ballasts or to bridge it on your existing fluorescent light fittings.

« What are low energy or compact fluorescent lightbulbs?
Lumens to Watts – how to choose light bulbs, brightness, colour and lifespan »