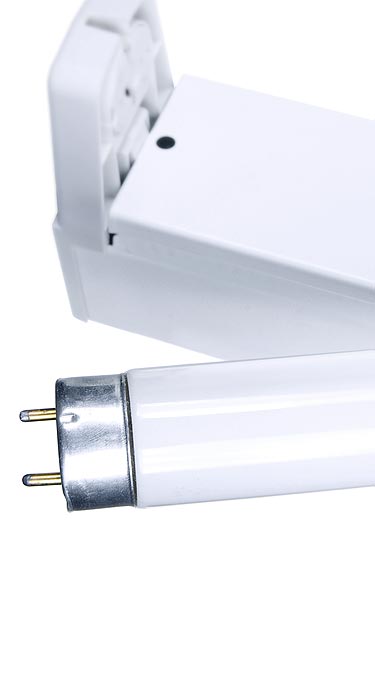 Fluorescent tubes have traditionally been a source of efficient and effective lighting in homes, long before compact fluorescent and LED lights came along. They are most commonly found in kitchens, either in a long 'strip' form (three or four feet in length) and occasionally circular. Smaller strips are sometimes also used for giving extra light on work-surfaces partially covered by kitchen cupboards. Fluorescent tubes are also to be found in garages, lofts and bathrooms. Because of the non-directional nature of the light, they ensure safe lighting.

Fluorescent tubes last several years. If there are signs of flicker, or a tube has apparently failed, it may not be the tube that has failed. All that might be required is a replacement 'starter'. These only cost a couple of pounds and it is worth having 'one in stock'. A starter is a small cylinder with two small T shaped pins protruding from one end. It is mounted in a round socket on the side of the lamp housing - it may not be immediately obvious, as it does not protrude much, and its end surface is about the size of a penny.

An urban myth has continued to circulate about the amount of electricity used by fluorescent tubes when they are first turned on. The extra electricity used is negligible. If it wasn't, it would blow your fuses and trip switches. The myth occurred because a calculation was made and a factor of one thousand was accidentally introduced into it.